How to make a concrete.

Firstly, we will need to prepare several main materials, which are sand, gravel, water and cement.
Then, mix the sand and gravel well before adding in the cement.
Mix them well. After that, add in water. We will need to add in the water slowly while mixing them so that it will not cause slumps.

This is the video of making a concrete.

i. Engineering Block – They’re not particularly attractive looking bricks but they are tenacious and solid and so very useful. 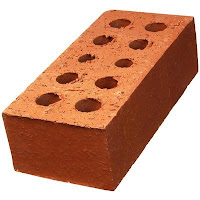 ii. Facing Bricks – this is a very common type of brick which is generally used in small or medium sized projects. 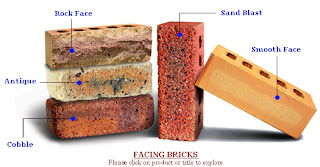 iii. Reclaimed Bricks – these are normally cheap bricks which you can get from other areas of the house or other demolished houses. 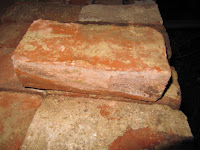 iv. Decorative Bricks – these help to add beauty or add a classy look to existing brickwork that might look boring to you. 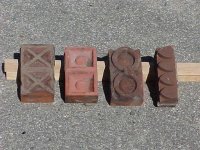 A house made of bricks & cement block have an impression of being solid and durable. According to a study, bricks houses are highly demanded.
Therefore brick & block are mostly used for build a house or high rise building for it to last longer~ Thank you for reading. =D
Posted by ARbloggers at 09:34 51 comments:

pros and cons of brick and block

Advantage:
-It can withstand heat thus giving fire protection to the house or buildings
-It has better sound performance where it able to block the sound from outside.
-It also offers lower utility cost. Energy efficient homes its inherent mass qualities help keep a home cooler in the summer and warmer in the winter.
-It reduces the nation’s energy needs and produce a cleaner environment
-It offers wide range of non-fade colors.
-It does not require painting  for protection from being destroyed like woods.
-It is a load bearing material which is it also help to support the building.
-It is virtually maintenance-free. It never needs painting, caulking or staining.
-It won't burn or rot like other finish materials

As for the advantage of block, let’s look at the construction strength.
- Concrete block homes is better in withstand hurricane, tornado and earthquake with the help of steel reinforcement. Poured concrete are added in the central hollow space of the block walls.
- While for the appraisal value( projection of future cash flows), the labor costs and material used to construct block homes are cheaper than wood frame home.
- Most importantly blocks are environmentally friendly material. The blocks are made from sustainable resources that are recyclable.
-Blocks are not subject to same damage as woods, therefore it require lesser repairs will lessen the impact on landfills.
Disadvantage:

-During extreme weather, it may cause degradation of the surface due to frost damage.
-It adds a lot of weight to the foundation. Therefore it increases the stress of the foundation which stronger foundation needed to support this bricks.
- When the brick show some damage, it is unable to repair that part only but to remove the entire wall section which very costly. Plus, material used are largely related.
- Poorly made bricks such as clinkers and older recycled bricks might be pitted, irregularly shaped, worn or prone to chipping.
- In humid climates, porous brick invites mold. It suffers damage as water and ice expand and contract in its pores.
- Brick is not cost-effective for many home builders. It can be damaged by vines.

The disadvantage of block is not insulated for northern climates because the frame wall are not being insulated. Therefore, the cold air from the outside will transfer into the house. Besides, block is not vulnerable to fire, mold and termites.

Stones or rock structures were one of the best building materials since ancient time. It brings some advantages and convenience:

Rock structures were the ample resources for early settlers. Circular huts were constructed from loose granite rocks throughout the Neolithic and early Bronze Age, and the remains of an estimated 5,000 can still be seen today. 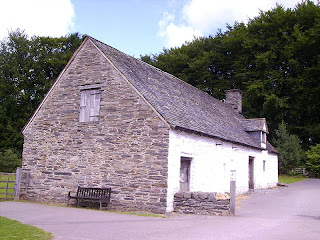 It is a type of traditional home, found on the high ground of Dartmoor, UK. Construction of this building is believed to have started in the 13th century. This type of longhouse, which was made of granite, still inhabited today while others have been converted into farm buildings.


Slate is another stone type, commonly used as roofing material in the United Kingdom and other parts of the world where it is found.

There are many famous building made up of rock structures such as granite rocks. The granite-strewn uplands of Dartmoor National Park, United Kingdom. Picture is below:

Mostly stone buildings can be seen in most major cities, some civilizations built entirely with stone such as the Pyramids in Egypt, the Aztec pyramids and the remains of the Inca civilization. 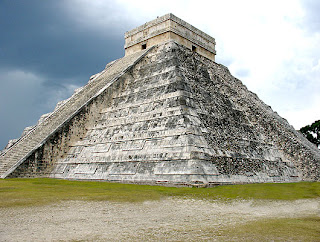 Picture above is the Aztec Pyramid. =)
That is the end of the topic. Hope you guys will enjoy reading. =D
Posted by ARbloggers at 08:12 45 comments:

Stones( also seen as rocks), by definition are solid natural combination of minerals which forms the earth's crust. They are formed through different natural processes, depending on their type. Stones can be classified into sedimentary rock, metamorphic rock and igneous rock. Each of them varies in hardness, composition of minerals and formation process.


How are they formed?

Little fragments and sediments were eroded and redeposited by few thousand and even up to million years of wind and water. They settle below water, being compressed and cemented layer by layer, by the weight of water and themselves. Upon hardening, they form sedimentary rocks.

2)metamorphic rock
How are they formed?

These rocks were once igneous or sedimentary rocks. Under extreme heat and pressure under earth, they changed in mineral forming metamorphic rock

They are in molten state underground, called magma. After eruption of volcano, the magma comes to the surface as lava and upon cooling, it turns into igneous rock.

Nature:Hard and non-porous
Examples of igneous rock: granite, scoria, pumice, obsidian
The use of rock by humans dates back to prehistoric era such as the stone age and neolithic. Even though the stone age had ended long time ago, yet stone in architecture still remain till today.
Stones are used in architecture because of their high durability, hence for protection purposes and stone buildings are built to last. They can be made into different sizes, shape,  colours and texture for different purposes such as roofing, flooring, walling, etc. Such stones that is being fabricated are called dimension stones. A classic example of a stone building is the pyramids in Giza.
Posted by ARbloggers at 08:56 33 comments:

How much do you know about bricks & blocks?
Are they the same? they have differences? and similarities?
Today's topic will find out answer for you! :)


First we talk about Bricks. 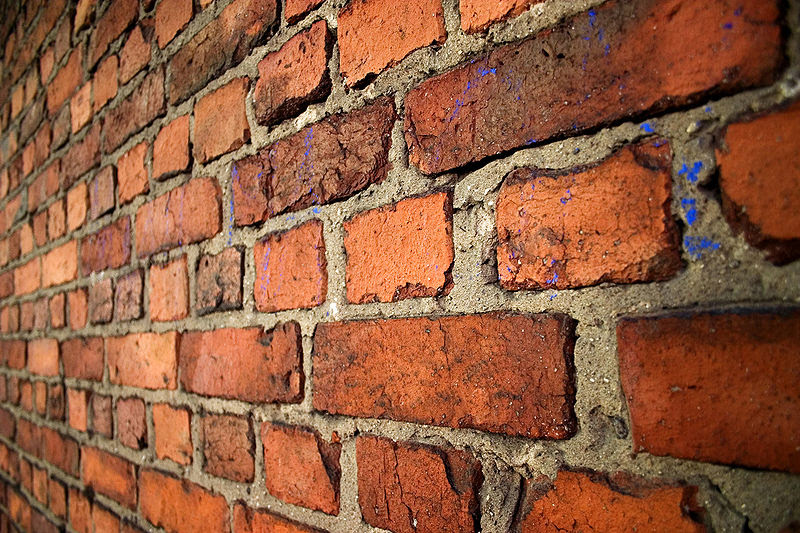 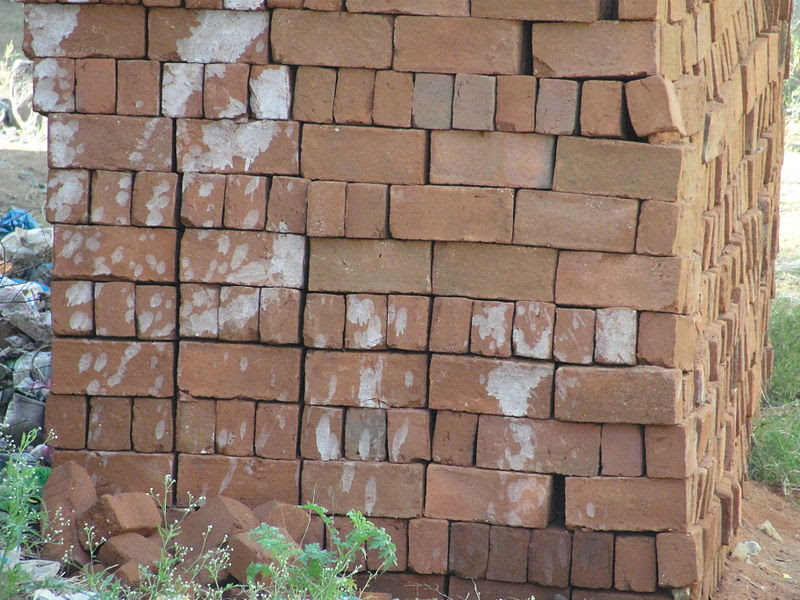 Building professionals considered brick as one of the most environmentally friendly building materials in the market, and for sure, it's been on the market for a long long time!
So what is brick? Bricks are rectangular blocks, most commonly made from clay, shale, slate, concrete, calcium silicate or stone. It is produced by mixing with sand and water, then pressed the clay into steel moulds and heated at high temperature at 1000°c which keeps in the strength of brick.
Want to know some facts about bricks? Bricks are actually a great insulators. Heat energy from the sun during the day will be store and only release for several hours after sun has set. Therefore, in hot climates, this thermal lag can translate into energy savings and increase comfort for the occupants.
Besides, The Great Wall of China is constructed and made of 3,873,000,000 individual bricks!


And now, let's talk about Blocks. 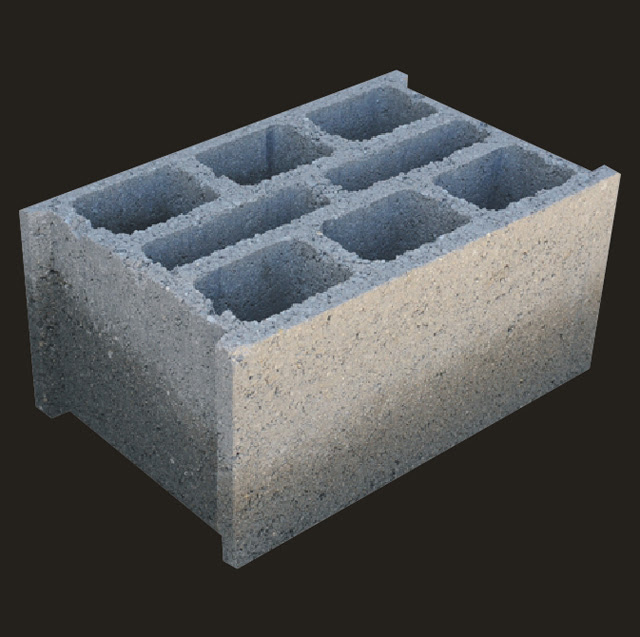 In general, size, usage, purpose and composition of bricks and blocks make the difference.
So what is block? Block is commonly made from concrete. Block are more larger size than brick. Blocks are more on used as partitions in interior applications, exterior application and also structural of a building.
For example of block, a concrete block. It is a building materials primarily used in the construction of walls. Most concrete blocks have one or more hollow cavities, and their sides may be cast smooth or with design as well. To form the wall, concrete blocks are stacked one at a time and held together with fresh concrete mortar.
Posted by ARbloggers at 08:09 39 comments: 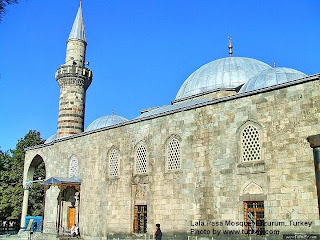 The above building is the Ottoman Building. This building is made of a combination of bricks, stones and blocks. This historical building is located at Erzurum province.
BRICKS 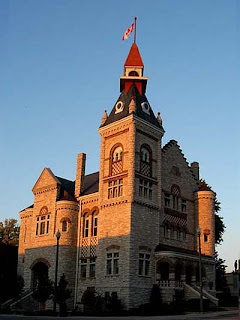 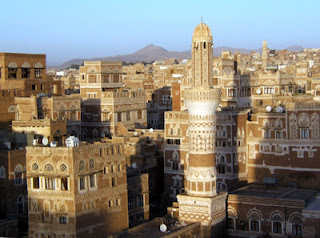 Yamen's Capital is well known for the streets that full with brick buildings.
There are also many other beautiful houses that are made up of blocks and bricks.
These Brick building are mostly historical building. It has successfully shown us the beauty of the combination of bricks.
Posted by ARbloggers at 08:26 29 comments: